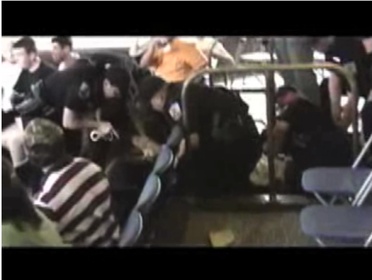 This is a script that indexes every frame of two videos, both pixel and sound data. It then treats one as a score and one as the instrumentation, filing through every pixel of every frame attempting to force the instrumentation data through the existing value of sound or pixel data of the current place the pixel grid.

In the first video, if the current pixel/sound space doesn't have a matching data part from the instrumentation index, it inserts the last matching value - causing the streaking data loss.

In the second video, if the current instrumentation index doesn't have a matching value for the current score it leaves the value of the score, effectively compositing the two sources and overlapping where possible.

John Baldessari sang Sol Lewitt's "Paragraphs on Conceptual Art" in an attempting to elevate or bring Lewitt's thoughts to a new focus, as he states at the beginning of the video. By using Baldessari as data to push through a social mime such as the popular viral video of a fake-prankster disrupting a political event for publicity, i hope to bring Lewitt's ideas once again to a newer medium in earnest but also maintaining a slightly sardonic tone that can be felt in Baldessari's video.